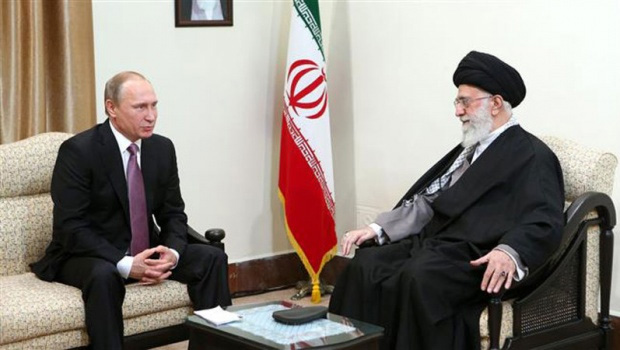 On Monday, Tehran was host to the third round of Gas Exporting Countries Forum (GECF) Summit. The heads of state and officials of the related member states gathered in Tehran to confer with each other about the future plans of GECF. Concurrent with this round of meetings, some of the heads of state, participating in this meeting, including the Russian President, Vladimir Putin, met and conferred with the Leader of Islamic Revolution, Ayatollah Seyed Ali Khamenei.
The Leader of Islamic Revolution, in a meeting with the Russian president, referred to the long term plots of the US and its allies in the region, pointing out that they intend to dominate Syria and thereafter expand their control across the region, while this plot poses a threat against all nations and countries, especially Russia and Iran.
The Leader of Islamic Revolution emphasized that the US and its followers, in regard to Syria, want to materialize their unfulfilled goals via the military approach, throughout the political negotiations, which should be prevented.
Meanwhile, in this meeting, the Russian president, for his part, named Islamic Republic of Iran an independent country, with a very bright and promising horizon, while also referring to Iran as an assuring and reliable ally in the region and across the globe.
In further remarks, the Russian president pointed out that the two countries’ stands on Syria are very close, while reminding that Russia emphasizes the resolution of Syrian crisis via diplomatic channels, as the only available option.
Previously, the Leader of Islamic Revolution, in his meetings with the Venezuelan and Nigerian presidents, had criticized West’s double standards, while reiterating that the US is untrustworthy. On this basis, the Leader of Islamic Revolution termed as wrong setting hopes on the cooperation and assistance of the US and the West in the campaign against operatives of terrorist outfit, dubbed ‘Islamic State of Iraq and the Levant’ (ISIL), and Boko Haram terrorist group. The Leader added that based on accurate data, the US and some of the regional reactionary regimes are directly assisting ISIL, and are playing a destructive role. The US maintained the same policy in Latin America, considering the Latin American region as its own backyard. However, the revolutionary movements of countries, such as Venezuela, led to the restoration of the identity and independence of this region.
Meanwhile, the US continues its direct and indirect assistance to terrorist outfits, including ISIL, in West Asia region.
Given the nature of the US administration, the Leader of Islamic Revolution pointed out that Iran, with the exception of the nuclear issue, will not hold any bilateral talks with the US in regards to Syria and/or any other topic